Middle English retret, from Anglo-French retrait, from past participle of retraire to withdraw, from Latin retrahere, from re- + trahere to draw. First Known Use: 14th century.

1 a (1) : an act or process of withdrawing especially from what is difficult, dangerous, or disagreeable (2) : the process of receding from a position or state attained

b (1) : the usually forced withdrawal of troops from an enemy or from an advanced position (2) : a signal for retreating

2: a place of privacy or safety : refuge
3: a period of group withdrawal for prayer, meditation, study, or instruction under a director
January was a l-o-n-g month, but there were moments of retreat. There is so much “treat” in retreat. What great pleasure. While the root is in “draw” as in “move away,” I’d like to think of it as the artistic kind, to draw an image of what’s core, what’s in your heart. There’s also the time and space to draw out creativity, to conjure the demons and the dreams. A retreat is whatever you need it to be.
One weekend Cecily Portman and Joanna Rose spent the weekend with me in Mosier. Good wine and cheese and cupcakes were as much part of the retreat as writing in the corner of the house we claimed, as walking in the crisp air, as spinning circles under the constellations, pointing and pretending to know their names. 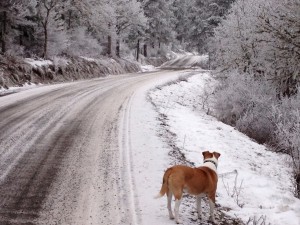 And the next weekend I spent with Linda Vogt, my pal from CCC, the woundrous Journalism instructor emeritus. She’s working on a mystery novel, which she’s generously sharing with her pals. While the meals were not gourmet without Ms. Cecily and Ms. J around, we had enough coffee and chocolate to get us through. While we were there, we were totally withdrawn from the world, in a frozen fog, for day after day. We barely saw the Columbia River Valley, and didn’t even hope to see the icicles of Mt. Adams and Hood. Rafi had a great time, too.

Whoever you are, I wish you the ability to find a retreat, a place to breathe, create, do whatever you need to do.
« Stafford birthday
the love of a writing community »