We played in my grandmother’s pool, its shimmering blue, the ripples, her arms sweeping the water. She moved slowly, her eyes closed, her face glistening in the June sun, turning toward breath and splash. The trick to staying safe was coming up rarely for air, keeping my mouth submerged, and breathing unperceptively through the nose.

I’ve always been ambivalent about being seen and heard. Growing up, I learned to survive not just by moving like a crocodile. Common to many of us from families where rage rules and secrets breed like burying hornets, I turned my body into wallpaper, or the tall ryegrass of summer, or blue pool water.

And part of me has always wanted to be seen. As the youngest of six, in a family of athletic, smart, and beautiful siblings, I wanted nothing more than to stand out, to hear from my battle-weary mother, “I am so proud of you.” In our family, calling attention to yourself in action or acquisition, like driving an expensive car, is considered showy. For showy, you will be chastised.

Those complicated instincts play out whenever I do anything public. Because I started in grad school thirty years ago forcing myself to read my poems in public, I’m not as scared anymore, generally, but outside of readings, I feel a deep menacing buzz in my gut when I call attention to myself.

The way I can talk myself into things like publishing a blog is the same way I was able to push myself past oxygen-deprivation when rowing: I will risk nearly every fear or pain for the sake of others, like the other 7 girls on a crew. During this time of COVID, when I hit upon the idea of offering a public writing and meditation practice for writers across the country and from other countries, I was both terrified and elated. Here was something I could do to help people connect with each other and their own creativity during a devastating time. And since it was a phone call, I wouldn’t be seen. And since I was doing little more than picking a poem, a prompt from it, and weaving imagery into that prompt in a meditation, I found a way not to be heard much.

But it became a lot more than I had imagined. Most days seventy people from fourteen states and three countries joined, held each other in silence, let poetry feed their art-hungry bodies, and showered each other with love and gratitude and good wishes when they left the call. 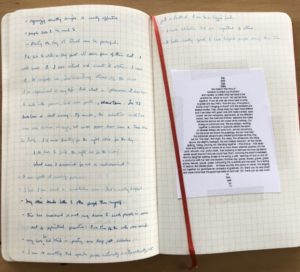 What I learned I’d like to share even though I know I’ll be learning from this experience for a long time to come:

–a simple process (a call, a 5-minute meditation, 20 minutes silence, one poem) can make a practice easy;

–strangers, even in silence, can create a sacred and inspiring space, can offer comfort and continuity;

–anonymous does not necessarily mean impersonal;

–poetry opens a safety net for everyone;

–the most relevant poems are not often the ones we’ve heard over and over;

–you never know how you’re going to be of service.

Many people thanked me for those 9am calls, and sometimes they would ask, “Do you realize what you’ve done?” Because I got so much out of the calls, I felt like I was serving myself and, therefore, didn’t need thanks.

By the end of the 42 days, I did not break into a full sweat by the end of each call the way I had the first two weeks. There was no Marco-Polo, nothing that might lunge at me if I made a sound. I learned to trust myself in the meditations as long as I knew where I wanted to aim the metaphors, the imagination. The poems by Li-Young Lee and Lucille Clifton and Ada Limon became the song I heard when I closed my eyes. Because so many people reached out, I think the realization that these calls were helpful has sunk in. I’ve copied off the email and cards people sent and scotch-taped them into my journal so that those kind words can remind me what we created together.

Thank you, everyone, who held the space on those calls, for sending your voice into the world, for your action through writing, centering your body, and allowing creative energy to rise in the world where danger has dismantled so much. You are creating something we will again hold.

Maybe you’d like to work together? Here are some salons and workshops I’m leading soon:

—Compose Free Virtual Writing Conference, May 16, 10am to 2pm. My workshop will focus on tension in any line: “In/tense: What Gives a Line its Oomph,” FREE

—Guts & Trust: What You Need to Write Your Root, a workshop through Westport Writers Workshop, June 22-26, 12-2pm, PST. Register through their site. Click HERE. $420

« Writing Together, a daily meditation and writing practice