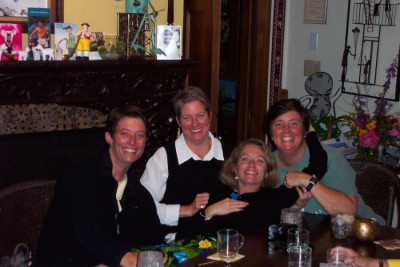 Our smiles give us away; the four of us in this photo are sisters. I don’t know exactly when it was taken or who took it. My sisters and I are ten years apart from oldest to youngest. Different shapes. Two straight. Two gay. Three partnered. One single. In the years since this photo was taken, one sister survived a brain hemorrhage, one sister took steps to deal with a lifetime of depression, and one almost died choking. We are lucky to be alive.

What I see in our blushing is our playfulness. What I also see in our faces is trust. Behind the camera is someone we trust. We trust the photographer to capture the exuberance of the moment, one sister lying across the laps of the others, and the person pushing the shutter-button knows us well enough that we will pose, we will expose ourselves to him.

The same may be true of a photo I found of my mother, grandmother, and aunts. 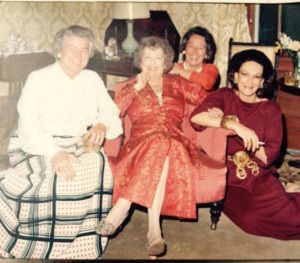 My mother sits behind my grandmother, both in bright red. Another aunt sits beside my grandmother. The aunt sitting demurely on the ground is an in-law, and later in life, an arch-enemy of my mother. This photo is unusual because my mother generally looked god-awful in photos. Here she looks good. She is happy enough to sit with her sister-in-law. None of the women in the photo is still alive. I cannot ask any who took the photo or what the occasion was, but I imagine the photographer was my uncle, the younger brother of the two sisters, the favorite of my grandmother, and the husband of the difficult aunt. All four women appear calm, loving, bright. They love and trust my uncle enough to pose together and to appear to enjoy themselves. The person taking the pictures makes all the difference.

What I’m saying is that you are the photographer in your novel. Behind the lens, you build the trust of your characters. Only you know the backstory to each of them. Only you can earn their willingness to set aside their grudges and gripes to tolerate each other, to pose, to shine with the joy each has for you.

What I’m saying is that you have to open yourself to your characters, learn their ways of laughing, how their mouths look when they laugh, how much they blush, who is willing to fold her legs under her and sit on the floor, who will touch her mother while you snap the shutter. Invite your characters to the table, to the living room, to inhabit your body. They will tell you the relationships with their sisters and in-laws. They will hold another sister on their laps, and they will blush when you capture their playfulness.

« Katrina, some of what lingers
Follow the Tracks into Your Writing »