On New Years’ Day, a friend and I snow-shoed near my cabin in not much snow, maybe 4 inches, enough to walk over poison oak and fallen snags. We ducked under pine boughs and oak branches, crossed a little creek, and when we hiked along a small canyon made by Dry Creek, now rushing, the banks crusted with ice sculptures, we found tracks in the snow. Not rabbit or deer or squirrel. We’d seen plenty of those. Bigger like a coyote or bobcat. Too small for a cougar (those are huge!). Like girls with spy glasses, we followed the tracks for awhile. Truth be told, I didn’t want to find where the animal lived, especially if it was a bobcat. But we followed the tracks over and under things. And even after we dusted off snow and cozied up to the pellet stove inside the cabin, after looking up images of tracks in snow, we had no idea what we followed. What lingers from New Years’ Day is the joy of following something unfamiliar, something wild and skittish. I had forgotten, but as soon as we took a step to follow the unknown, those feelings rushed back. 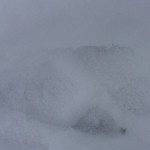 hard to see the track we followed

The feelings are similar to reading the writing of someone brave. Like Sharon Olds. Stepping into the first line of her poems, I don’t know where I’m going to go. And I love not knowing.

I loved the things that were ours—pink gloves,
hankies with a pastoral scene in one corner.
There was a lot we were not allowed to do,
but what we were allowed to do was ours,
dolls you carry by the leg, and dolls’
clothes you would put on or take off—
someone who was yours, who did not
have the rights of her own nakedness,
and who had a smooth body, with its
untouchable place, which you would never touch, even on her,
you had been cured of that.

[Read more of the poem here.]

Sharon Olds is one of those writers who writes the real thing, the raw, the untamed. Reading her work always gives me courage, shakes my head at the juicy connections she makes, unnerves me with her insights. At coffee the other day a friend said, “Sharon Olds saved my life.” That’s it: truth, no matter how messy, saves us, offers us a lifeline. Her raw, intractable poems compel me to write about the things I don’t read often enough, things I don’t want to write about but have to, so that I can breathe, so that I don’t choke on my stifled anger, shame, gratitude, or exuberance.

Women writers, like Maya Angelou, Adrienne Rich, Sharon Olds, and others, are the reason I’m offering monthly writing salons at Another Read Through books starting Wednesday, February 10, from 7-9pm. (For more info, click HERE.) Starting with Maya Angelou, we’ll share some of her background, read some of her writing, and use pieces of her writing as prompts to write for 30-40 minutes. Then, we’ll share our writing, respond to each other, using the Gateless method, which calls out the shimmering pieces of a writer’s work.

I hope you’ll follow this path with me and share the joy of your instinctual, abundant writing.

« Be the photographer in your novel
The Storied Brain »