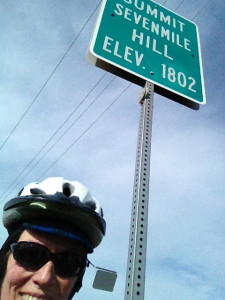 This morning, the sheen on the street is shiny gray, and the clouds are as thin as veils. What moves through me like those clouds is news of a friend with lymphoma. He’s an athlete, a writer, someone who waits at the end of a reading and approaches you and says the thing you hoped someone would hear and say out loud.

In the Q & A portion of the Brave on the Page reading at Powell’s in early January, someone asked if a writer should join a group. One audience member felt writing groups were a waist of time. Some are. Some break poems over their knees for the sheer pleasure of breaking. Some whitewash the pain out of stories. But then, there’s the one or two that fit, like cashmere sweaters just the right size. They’re hard to find. They’re hard to create.

Here’s a profile of one of the groups that tastes like sweet corn soup on a February day:

–the Dangerous Writers in Portland began with a few charismatic leaders, bent on bending rules, indoctrinating eager, vulnerable writers with a new vocabulary and new rules.

–the members were ferociously dedicated, meeting each week, and making sacrifices to be there (some folks spent so much time writing to make the weekly page count that they didn’t eat enough, didn’t meet daily obligations.)

–the responses in the group to writing were stars drawn over words doing their work, spicy and seductive, with discussion of the “bumps,” so gently put and so honest that the writer felt powerful enough to gather feedback, to ignore feedback, and to keep rolling down the lane with feedback as a bumper.

–the group socialized outside of writing time, with invitations sent to everyone in the group.

–to change things up, there were annual parties and annual writing challenges.

–sporadically, news of publications and honors went out, with each person published willing to share his/her connections or queries or websites or process.

–people showed up, for each other, for readings and weddings and hospital visits.

–resources like agents and web skills and toboggans were shared.

–rules about how to write fiction (first person, personal, etc.) that the group started with changed as the group opened up and changed tables and grew, and the writing opened up and grew.

And what’s grown is a community, one connected by email and Evite and fireworks in Estacada. We don’t all write together around the same tables. We don’t write the same things. We don’t live in the same place. Even someone who has moved to San Francisco, who has just received news that he has lymphoma, can reach out and ask the dangerous writing community for book recommendations, can ask for laughter and for a 57-word flash fiction piece that includes a word from his chemo regimen. And he will get books and writing and love. It’s that kind of group. It’s that kind of love.

New years bring stacks of resolutions, the climb toward light, taxes, reflections on civil rights, toppled resolutions, and more. Lucky for us in Oregon (and some others around the world) we celebrate social justice and equality and crystal imagery every year through William Stafford. January marks  a migration. His poems are a flock landing every year. Or maybe I’m the one that gets to fly into his poems and feed seasonally.

If you haven’t been to a Stafford reading, you should go. What happens is that 3-4 people get up and read one of his and one of theirs, often in response to his, and then, the audience is invited to read one of his. Oh, the poems are gentle and accessible and poignant. What happens is that everyone in the room realizes he or she is a poet, he or she is gifted with the ability to set down in words some impression, some insight, some flash. Everyone is able and invited to write.

I’d like to invite you to two of them in which I am involved:

Sunday, January 27th, 1:30 pm,
Molalla Public Library, 201 E. 5th St., Molalla, Oregon.
Hosted: by Larry Anderson and Kate Gray. Sponsored by the Molalla Writers Group.
Featuring: Larry Anderson, Brian Biggs, Maureen Cole, Kate Gray, Carol Hausholder, Steve Slemenda, and Esther Wood, who will read Stafford and Stafford-related poems followed by reader/audience discussion of his work, life, stories, anything else of pertinence. Guests are warmly invited to read their own work and/or related poems. Those not interested in reading poems may sit back and enjoy! The film, “Traveling in the Dark” will be shown, with a short discussion to follow.
Contact: Kate Gray.

Stafford invites everyone to write. I do, too.