I wish I had a river
I could skate away on

Joni Mitchell’s words formed me well before my bones stopped growing. Never a good singer, I crooned off key her high and low notes, her minor chords, the losses she lived, the cases of love she drank. She painted sunlight the way I saw it, like butterscotch, and called people, Blue, the people I knew to be walking through my life in a haze. 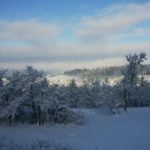 My mother took in strays, not people off the street, but cousins who were drug addicted, or dangerously depressed, or transitioning out of mental institutions, or just plain lost. They slept across a long hall from me. At night instead of coyotes howling in the hills, I heard sobbing, equal parts animate and inanimate, like ice breaking in spring. My mother provided shelter, just enough warmth and humor to help them find their own warmth. She responded evenly to their stories. She prayed. She crocheted. She expected them to go to mass.

These cousins didn’t have much to do with me. But one became my French teacher and was one of the best teachers I ever had. Much more comfortable with children than adults, he spoke teenager. Other cousins were quiet, withdrawing from things I knew nothing about. They were like milkweed pods poking through the snow, their silk and seed already tossed into the autumn wind.

In New England back then, radiators banged and rattled, their heat wet and unpredictable, and winter’s chill was a cold hand suddenly on the neck. I used to huddle beneath blankets and listen to “River” over and over.

One cousin stayed with us after she stopped eating, weighed 70 pounds. My mother plucked her from the hospital. The oldest in a family of ten whose mother died when an aneurism suddenly dropped her, this cousin, even skinny, was so pretty I couldn’t look at her. When she stayed with us, she curled her knees to her ribcage sticking out and sat on the floor in the living room while my mom sat in her chair facing the fireplace, her drink on the side table, her needlepoint in her lap. I sat on the cold floor with my cousin. She didn’t say anything to me, and I didn’t say anything to her, but I knew she had lost something and was sad. That night Joni Mitchell played loud enough for both of us.

When I went away to college, I carried those notes in my throat. In the early years of college, my bones were still forming, and I started to row so hard on one side, port side, that I pried open my ribcage. My arms wanted to move me over water so badly I pulled the bones away.

Maybe those lonely winter nights when I shivered under a pile of blankets and the radiator in the other room hissed and gurgled, when a cousin was vomiting down the hall, maybe those minor chords, those blue notes helped me breathe, helped me feel. Maybe it was all the stories untold, all the songs sung off key, all the strays taken in, that helped me get away to a green place, to a place where it don’t snow much, it stays pretty green, like Oregon. Maybe Joni Mitchell taught my feet to fly.

May this season open your heart. May you find comfort in music and memory and the people who wander through your life. I hope you realize, as I do now, that you can act, you can do things to help, even if it’s sitting next to someone in silence. I send you blessings, light, and hope.