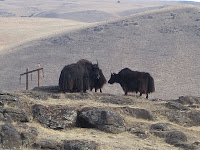 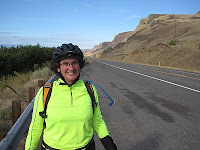 Last week I rode from Lyle, WA 20 miles along Rt. 14 east, to Rt. 97, went uphill to Goldendale, and headed west for another 40 miles. Did I mention the rain? Did I mention the wind? 30 mph gusts. Oh yeah, baby.
But what sticks in me is the viewpoint of what used to be Celilo Falls. As you face south, belly up to the road sign, the guardrail, to the right is Portland, and the mighty Pacific, to the left is The Dalles, the bridge, and in front of you used to be thousands of salmon, a series of falls, and one of the greatest trading places in North America. The wind blasts the basalt columns in there, the sage holds on until it can’t, and magpies lift off in all their starkness, their bright black and white. I do not feel alone there.
The browns with the shock of green grass, yellow delicate flowers, startled birds, they stick to my heart during the week. They are the resting place. They are the lingering escape.